During the past 10 years, at least, I have been following the growth of International Reserves. The first graph I elaborated to show their growth was back in 1999 and it was based on IMF data up to 1997. Recently, I have been updating the graph using Alex Tanzi´s numbers. Alex works at Bloomberg and from time to time, Doug Noland at www.prudentbear.com quotes his numbers regarding International Reserves, excluding gold.

As of August 2008, as you can see from the graph, according to Alex Tanzi International Reserves were growing at the explosive annual rate of 26.5%. Suddenly, since August, Reserves have stopped growing. 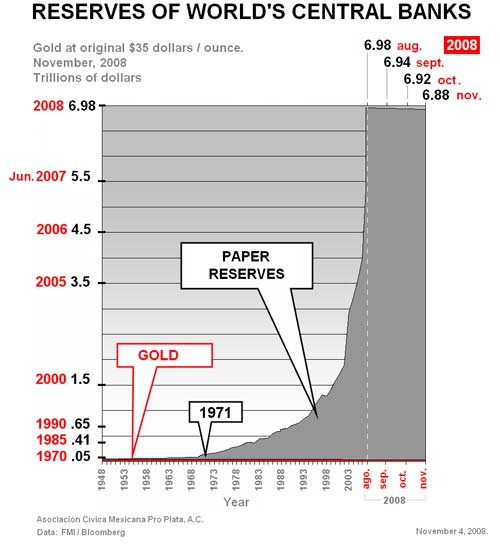 In August, they were just under $7 trillion expressed in dollars, though “paper” Reserves are made up not only of dollars, but also euros, British pounds, Japanese Yen and a smaller quantity of some other currencies.

It seems to me that when a huge number such as $7 trillion suddenly stops growing, it must indicate that something very serious is going on. The growth of Reserves was so severe it was really an explosion; quite abruptly, it has stalled and has actually turned negative.

One explanation might be that since the figure is given in dollars, and the values of the other currencies which make up Reserves have been falling with regard to the dollar (except for the yen), that the contraction in the value of euro and pound Reserves caused the amount of Reserves to begin contracting.

Still, the huge rate of growth of Reserves, year-on-year, was up to 26.5%, and it seems to me that this previous explanation is not sufficient to account for a sudden halt in growth and the onset of a decrease in Reserves.

I have not seen a single article dealing with this important change; I comb the Internet daily and I have found not one comment on this development.

The International Reserves were growing by leaps and bounds, as a consequence of the “Imbalances in International Trade”, where the countries which were issuing currencies accepted as Reserves were exporting huge amounts of their currencies in “payment” of their trade deficits. These currencies were then re-invested by the exporting countries in bonds and agency debt. The main actor was the US, which was able to fund its enormous fiscal deficits through the sale of these bonds and agency debts. It was a nice deal while it lasted for the US and, I suppose, for the Brits as well as the Europeans.

Now, if the Reserves are no longer growing but diminishing, this might indicate that the exporting countries are no longer buying and accumulating more US, British  and European debt. If they are not accumulating more foreign currency bonds and debt, then the fiscal deficits of the US, the Brits and the European Union countries are no longer being funded – especially important to the US, which is running an immense fiscal deficit, what with the US Treasury going into debt like a drunken sailor on account of the need to bail-out all and sundry debtors.

Now if the US deficit is not being funded, then that means that the fiscal deficit is simply being monetized by the Fed. Or what else can it mean?

The US is on track to incur a fiscal deficit of $1 Trillion, perhaps much more, in this fiscal year. If the International Reserves are not growing, that means it will be impossible to fund that deficit. That would mean: monetary inflation in spades, in the US.

I’ll leave you with this question: what is the significance of the drastic change in the growth-trend of International Reserves, from explosive growth, to the sudden beginning of a contraction?

I hope others, more competent than myself, address this question. I believe it is quite important that we have an authoritative answer to it.