A translation, with slight editing, of a recent article, for the benefit of readers who may be interested in the monetary history of Mexico.

John Maynard Keynes: "Lenin was certainly right, there is no more positive, or subtle means of destroying the existing basis of society than to debauch the currency. By a continuing process of inflation, governments can confiscate secretly and unobserved an important part of the wealth of the citizens. The process engages all the hidden forces of economics on the side of destruction, and does it in a manner that not one man in a million can diagnose" (Economic consequences of the Peace)  (I am indebted to Bill Murphy of GATA, for this quote, at www.lemetropolecafe.com)

From 1572 (perhaps even earlier) and up to 1914, the silver content of the Mexican Peso (which during the Spanish Colonial era was known as the “Piece of Eight Reales”) was held to a remarkably stable standard: 24.44 grams of pure silver. (At some times during the early Colonial period it was minted with a slightly higher content; during one period of twenty years, with a very slightly lower silver content.)

For 342 years, the Mint at Mexico City produced the world’s most stable currency. Only the Byzantine Empire holds a superior record.

In 1918 the revolutionary president of Mexico, Carranza, minted a new Peso. The Peso’s silver content was reduced from 24.44 grams, where it had been for 342 years, to 14.5 grams.

In 1925, with U.S. coaching, a Mexican Central Bank was formed and named Banco de México. This organization was granted the monopoly of issuing banknotes; up to that time each private bank issued its own banknotes under its own name and responsibility and redeemable in precious metal at sight to the bearer. (See sample, below).

As a final consequence of the creation of the Central Bank, the Mexican nation gave up real silver money. Through a series of accommodations to political circumstances we have arrived today at a simulated Peso, which circulates together with junk metallic coins and banking computer digits.

In cultural and human terms the use of simulated money has cost Mexico the disintegration of the institutions which have given shape to our nationality. The cultural and human stature of each Mexican has been severely reduced; we have all with no exceptions fallen into an endless race for survival. Simulated money is a merciless master who grants neither peace nor tranquility, and who imperiously and ceaselessly orders: “Work! Work! Work!” One hundred million Mexicans are submissive slaves of the system of simulated money.

Faced with a history of destruction of our culture, of our institutions and of the human dimensions of Mexicans, not to mention the impoverishment which has resulted from the devaluation of our currency, all attributable to the simulated Peso, the Central Bank remains supremely unconcerned; however, the consequences of abandoning real money in favor of simulated money are inevitable, not only for Mexico, but for the rest of the world as well, which is suffering the same destructive process. 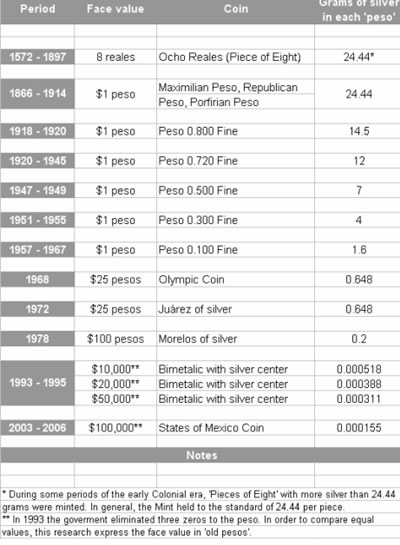 During the 20th century silver rose in value propelled by monetary inflation around the world; besides the rise in value of silver in the world markets, in Mexico we experienced the creation of an astronomically large mass of simulated money lacking any substance, which devalued our currency. Thus the price of silver expressed in our Pesos rose even higher. Consequently, only ever smaller quantities of silver could be used to mint the Peso coins; the latest coins include only microscopically small amounts of silver in the Peso, the humble descendant of what was, in other times, the world’s most important currency.

The graph below shows us that the creation of simulated Pesos is still going forward vigorously. Money in circulation (M-1, coins, bills and bank deposits) has grown from $4 billion Pesos (of the same “new” Pesos we are currently using) in 1986, to $1,062 billion Pesos in 2006. M-1 has grown 265 times in 20 years, though our economy is by no means 265 times larger. 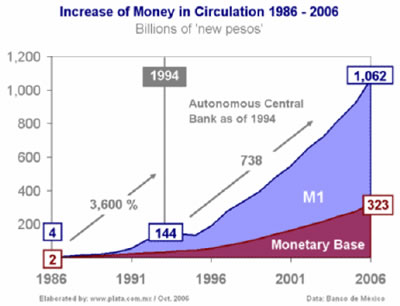 No reform of our monetary system is possible; there is no way to restrict and limit the growth of M-1 to the growth in the real economy, without causing a total collapse. Mexico, like all countries in the world, is addicted to simulated money. Our Peso will have to continue losing purchasing power.

All we can do is to insist that a quantity of real silver money must be put into circulation, in parallel with simulated money, so that Mexicans may have a small but important alternative for their savings, outside the banking system, which will inevitably go on inflating the monetary mass of M-1.

Let us heed the wise words of don Manuel Gómez Morín, founder of the Banco de México, the Central Bank, and founder of the PAN, the “National Action Party”:

“Silver coins have been, and for a long time yet will be, the last resort for our economy, impoverished or damaged by bad governments. For this reason, the silver coin is “the people’s money”. As long as a minimal part of our monetary savings remain in silver, the consequences of disasters will have a limit; it will be possible to avoid hunger and the desperation of the people, and there will always remain at hand the possibility of rebuilding the monetary system and the whole economy of the country”. “La Nación”, Year III – No. 144, 15 July 1944.

A banknote issued by a private bank: a DERIVATIVE of real money

The banknote reads: “The Banco Nacional de México will PAY FIVE PESOS at sight to the bearer in cash”

The UNDERLYING of the derivative: FIVE SILVER PESOS.

This banknote reminds us of an age in which each bank was responsible for the redemption of the banknotes it issued.

Today, the Central Bank has no responsibility whatsoever. It issues simulated money with simulated banknotes.