The Mexican Peso and the Roman Denarius
Hugo Salinas Price

With regard to silver coinage, Mexico has followed the model established by the Roman Empire 2,000 years ago.

The Roman emperors did not have enough cash to pay for the expenses of the Empire. They had to pay the bureaucracy, they had to pay for “bread and circuses” for the rowdy Roman population and importantly, they had to pay the armies that kept the barbarian invaders at bay. Taxes brought in insufficient revenue and there was only one thing they could do – reduce the silver content of the coinage. During the late Roman Empire bronze coins were ingeniously silver-plated to resemble silver coins; a little rubbing revealed the bronze.

Up to and during the time of Porfirio Díaz, who ruled Mexico as virtual Dictator between 1876 and 1911, our peso had not changed at all for several centuries. The silver contained in the peso coined by Díaz was 24.44 grams, the same weight contained by the “Pieces of Eight” minted during the centuries when Mexico was ruled by Spain.

As a result of the Revolution of 1910, Mexico began to apply Roman monetary technique.

In 1918 Mexican President Carranza issued a new peso that contained only 14.5 grams of silver – not at all surprising; he was after all a revolutionary and revolutions traditionally depreciate the currency in order to pay expenses.

However, it seems that coinage of pesos with so much silver produced fewer pesos with which to pay expenses, so the content was reduced in 1920 to 12 grams, in a coin which was 72% pure silver: our “0.720 Peso” which we used for 25 years.

By 1945 we were well into the Age of Paper. So much paper money had been issued – both in Mexico and in the whole world as a result of World War II – that by 1945 the silver in the “0.720 Peso” was worth more than one peso, and it was no longer possible to mint this coin.

In order to continue using silver pesos, a new peso was issued in 1947 and following the Roman style, it contained less silver; this new peso had only 7 grams of pure silver. However, this peso lasted only three years; it had to be discontinued for the same reason as the previous peso: due to monetary inflation, the 7 grams of silver in the peso rose in value to more than one peso.

In 1950 the silver content of the peso was again reduced, to 4 grams, and the same thing happened once again – the 4 grams of silver rose in value to more than one peso; this coin was in circulation only four years, up to 1954.

In 1957 we had a new peso with silver, all 1.6 grams of it. A little crumb of silver in the peso! This peso coin circulated for 10 years, until at last the combination of our own inflation (printing of money and expanding bank accounts) and world inflation made even this tiny crumb of silver worth more than one peso and coinage ceased. Such has been the history of the Mexican silver peso.

While all this was going on, in 1949 we had begun to mint a coin containing one ounce (31.1 grams) of silver; it has with no nominal value, and is known as the “Scales Ounce”.

In 1979, the excellent political intuition of our President at that time, Don José López Portillo (1976-1982), led him to obtain legislation with a view to turning the “Scales Ounce” into money; the legislation ordered the Central Bank to quote the daily value of the ounce in pesos. This quote, it was supposed, would serve to give the coin its value as money.

However, López Portillo’s admirable vision ended in failure, because the quoted value of the ounce fluctuated every day, and this fluctuation produced losses for those who were using the coins as money. Since the fluctuating value of the coin caused this problem, the aim of using the “Scales Ounce” as money had to be given up in 1981: up to this day, it remains a valuable commodity, but it is not money.

The failure of López Portillo’s legislation was due to a serious flaw: the legislation omitted the key measure for turning the “Scales Ounce” into money. This measure determines that the last quote of the Banco de Mexico (the Central Bank) shall not be reduced by any further quote.

If this measure had been included in Lopez Portillo’s legislation, we should today have in circulation as money, in parallel with the paper peso, the famous “Scales Ounce”. It is sad to think how close we came to reaching that happy situation for the savers of the country, who have suffered so much due to the devaluations that came our way.

In 1982, Mexico began to mint the one ounce pure silver “Libertad” coin which has taken the place of the “Scales Ounce”. Minting continues to this day.

Don José López Portillo ended his term sadly; he was completely destroyed by the cruel anger of public opinion, outraged by the mistakes he made during his term. However, thanks to him, we have the “Libertad” silver ounce and we are striving to fulfill his desire and vision – absolutely patriotic and Mexican – the renewed use of silver as money.

The defense of our nationality in the coming hard times demands that Congress and our President-elect approve very simple legislation in order to fulfill López Portillo’s vision of permanent silver money for Mexico: such legislation will determine that a quoted value of the “Libertad” ounce by the Central Bank, shall not be reduced once it is established.

That’s all we have to do, to recover silver as money and keep it forever. Silver, our money for almost five centuries!

(The attachment illustrates the Roman system of reducing the silver content of the Mexico peso.) 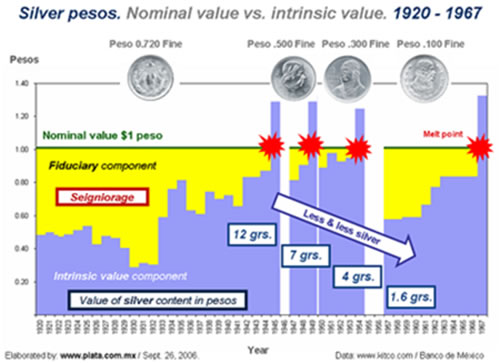