A “system” refers to some activity that endures through time. Once a system is created and installed, the associated activity will be maintained for an indefinite period. This is possible, because all systems incorporate internal controls which correct the activity when it tends to go beyond certain limits or parameters. If the activity were not contained, the parameter would be violated, the system would become unstable and its activity would come to an end.

All systems have parameters or limits to their activity which ensure their stability and operation through time.

As an example, a modern steam boiler incorporates a control system which monitors the level of its water, the temperature and steam pressure. The danger posed by a boiler with no controls leads manufacturers to install back-ups to these controls, to make an explosion totally impossible. Limits in the activity of the boiler are essential to safe operation.

When we speak of any system, we must recognize its critical parameters. Beyond the parameters, the system breaks. In the case of a steam boiler, it may explode.

We mention all this, because once upon a time, the world had an “International Monetary System”.

This system was based on a fundamental principle which allowed its orderly development: international money was gold, and to a lesser extent and in certain parts of the world, silver.

Towards the end of the 19th Century, no one could imagine that there might be another kind of money that was not gold or silver. It was simply unimaginable, at that time,  that anything else might serve as money.

At the beginning of the 20th Century, silver was eliminated as international money and the world’s money was gold from then on, until 1971.

The great banks of the 19th and 20th Centuries were founded upon gold. At the beginning of that era, international financial relations were systematized on the basis of gold as money. International payments were denominated in gold exclusively. Banknote issues were “bills payable to the bearer at sight” in gold. If a bank could not redeem instantly in gold the banknotes it had placed in circulation, it was deemed to be bankrupt.

Gold was thus, the factor which limited the extension of further credit and the issue of banknotes. The critical parameter for any bank, was the supply of gold in its vault, with which to liquidate or redeem in gold its banknotes, to the bearer at sight. Under no circumstances could a serious bank run the risk of not being able to redeem its banknotes, due to a lack of gold.

The international monetary system was a true “system” and it reached its highest development in 1913.

From that year on the system was constantly under attack, which took the form of implementing subterfuges so that banking activity might achieve its objective: the gradual circumvention of gold, which was the obstacle to the unhindered expansion of banking credit. The brightest brains concentrated their attention on the search for ways to eliminate or circumvent  that obstacle, without provoking the concern of the public or the authorities.

At the end of World War II, the world monetary system was overhauled. The monetary use of gold was restricted to gold payments which the U.S. might make to Central Banks of the world, in exchange for dollars those banks might wish to return to the U.S. And as of 1933, no individual in any part of the world had a right to collect gold upon tendering a bank “I.O.U.”, a banknote. Under the Bretton Woods Agreement of 1944, only Central Banks retained the right to collect gold from the U.S. in exchange for American dollars, the American “I.O.U.s”.

Even so, gold remained a nuisance; the special nuisance for the U.S. was its established obligation to deliver gold in return for dollars tendered for payment by Central Banks: too many countries were turning in, for gold, the dollars which the U.S. was issuing in quantities larger than the world market wished to retain. U.S. gold reserves shrank from over 20 thousand tons at the end of WWII, to some 8 thousand.

On the other hand, the U.S. wanted to continue to issue more money to pay for its expenditures on war and social programs. The international monetary system was approaching a critical parameter, but any corrective measure was discarded.

Instead of reining in the excess, the U.S. discarded gold, the control which was critical to the system and which was signaling an imperative  halt to excessive expenditure.

On August 15th, 1971, the world was left without an “International Monetary System”. What remained, and remains to this day, after the U.S. refused to redeem dollars for gold, is no longer a system. It cannot be a system, because the internal control which blocked the violation of critical parameters and insured operational stability has been removed.

Many hundreds of thousands of officers and employees of banks and financial institutions are under the impression that there is an international monetary system, because each of these individuals has to carry out his work under a set of rules. The rules governing the internal operations of their companies lead them to believe that the world as a whole has a monetary system. The attention of these people is concentrated on the systematic activity of the financial institutions or banks in which they work. As far as the whole of which they form a part, they are really mistaken, for there is no international monetary system.

After a century of attacks on the critical limiting factor, we have passed from a system, as an activity regulated and controlled within limits, to a process.  What we have today is an “international monetary process”. A process is not self-sustaining, it has a beginning, a middle and an end.

An explosion is a violent process which begins, expands and finally exhausts itself and ends.

The graph shows us clearly, that we are living in a period of “monetary explosion”: 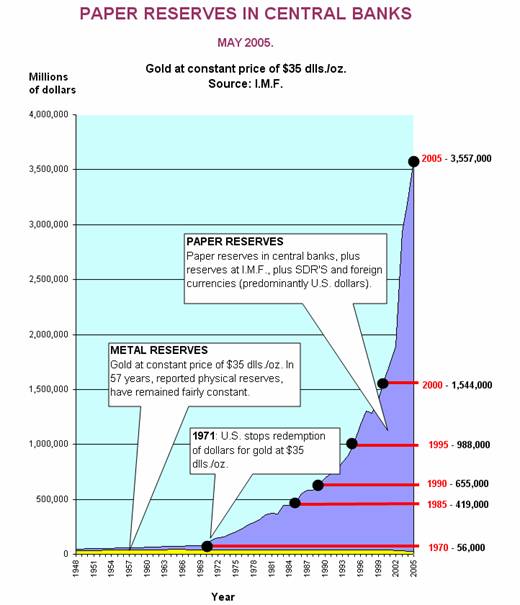 In 1970, U.S. credit expansion had already violated the critical parameter. An unmanageable quantity of dollars - $56 billion, which originated in U.S. credit expansion - was lying in the reserves of Central Banks around the world, and these Banks were calling for gold and provoking a gold hemorrhage at the U.S. Treasury.

Reserves grew from $56 billion dollars in 1970, to $419 billion fifteen years later, in 1985 – a number 7.5 times larger. Note by comparison, the relatively static behavior of world Central Bank reserves from 1948, when the value of the gold in reserves was greater than value of the paper currencies used as reserves, to 1969. During those years, the U.S. monetary authorities were somewhat disciplined by their respect for the established parameter, the obligation to redeem dollars tendered by Central Banks, for gold. The feedback to monetary policy which originated in gold flows maintained the stability of the international monetary system.

In 1971 the international monetary system was broken and the world entered a runaway process of credit expansion and money creation.

All processes have a beginning, a middle and an end.

When this irresponsible expansion of credit (debt) and explosive creation of money comes to an end, as the process exhausts itself, the world as we know it today will be in ruins after the collapse (the implosion) of the world’s financial structure.