I have before me an interesting document. It’s a flyer distributed in November 1841 by the governor of the State of Mexico (one of the States of the Mexican Republic) Luis Gonzaga Vieyra, by means of which he informed the public of a decree issued by the then provisional president of Mexico, General Antonio López de Santa Anna, which dealt with the minting of a new copper coin.

The preamble to the decree set forth the reasons which made it necessary. (I shall intersperse my comments in what follows).

“Whereas some measures taken by previous administrations gave rise to the circulation of an enormous quantity of copper coinage, which being falsified, its value was altered in the market, and established an extremely pernicious fluctuation in commerce and among the public in all mercantile transactions, because this money, not representing a fixed and positive value, neither did the articles of commerce, even those most necessary for life:”

HSP.- Here we have an exact description of monetary inflation, with whose effects we are all familiar, and which was at that time caused, evidently, by counterfeiting the copper coin. Yesterday as today, inflation deprives money of a fixed and positive value, and this is reflected in the price level.

“That evils so serious cannot be avoided, while there is in circulation a money with imaginary value, very distant from the intrinsic value of the metal from which it is formed, and whose type has been reduced to nothing due to the mistaken measures incorporated in the laws of January 17 and March 8 of 1837:”

HSP.- General Antonio López de Santa Anna is blamed for many calamities suffered by the Mexican nation. However, his words show that he had a clear understanding of the evils engendered by bad money – money of imaginary value and lacking intrinsic worth – and describe exactly the ordeal we are undergoing in Mexico, along with the rest of the world.

“That all cautionary and repressive measures ordered by the Government with a view to halting the counterfeiting of this coin, have been evaded by the interest of the coiners of false money and by the loop-holes open to such criminal abuses in the laws we have mentioned:”

HSP.- In this regard, we might comment that today, here in Mexico and all over the world, the counterfeiting (or its legal equivalent) of money has been instituted officially, and that all banking systems in the world participate in this antisocial subversion.

“That it is the general outcry of all inhabitants of the Republic, that swift, energetic and decisive measures be taken to stop the progress of this national calamity, even though to obtain this, some particular fortunes might suffer some detriment:”

HSP.- Santa Anna quite justly calls inflation (i.e. a large increase in money in circulation) a national calamity. The problem in our days, is that this national calamity has been legally adopted and instituted, and getting out of it will make us all “suffer some detriment”, because the pernicious effects of inflation (i.e. the expansion of credit and thus money) reach into the most remote corners of national life.

“That according to my principles, it is preferable to take any measure that will protect the sacred right of property, and respect the value given by a law to the copper money in circulation, even though it has given rise to the most scandalous counterfeiting.”

HSP.- General Santa Anna clearly recognized that inflation of the money supply is a violation of the right of property, because it leads to the pillaging of the population through the shrinking purchasing power of the coin. For General Santa Anna, it was a question of principle to end this pillage by “any measure”, that is to say, at all costs. Unfortunately for us, rulers no longer appeal to principles at any time. This is progress?

“And lastly, since the people have granted me, as Head of the Nation, their  unlimited confidence so that I may act, in extraordinary cases, beyond the powers of the Magistracy, in order to save the Republic in grave dangers, as is the case where tranquillity and rest are altered, as communicated with regard to this crisis by the authorities, the free press and all the known organizations of opinion: by virtue of the powers granted to me […………] I therefore decree:”

HSP.- Monetary inflation alters tranquillity and rest, which constitutes a grave danger. How well do we know this! Mexico and the entire world lives in intranquillity and in frenzied agitation that rises out of the bad money we must use – not the bad money of forgers, as in those times, but the bad money of monetary and financial systems authorized by Law. How we wish our President Fox would show courage like that of General Antonio López de Santa Anna, and free us from this calamity, money of imaginary value, lacking intrinsic worth!

The decree goes on with information regarding the process of introducing the new copper coinage. Article 5 is worth reading:

“All copper bars with which it may be desired to assist the Government, will also be received, and their value paid at the going price with the same coin that is to be minted, or by other means which may be agreed to with the Government.”

HSP.- This is an offer of “free coinage of copper”; in other words, whoever delivers a copper bar, will receive in payment the same copper in the form of coin. This is just the measure we have been advocating with the free coinage of silver: the silver delivered in bars, is returned to the owner in the form of coined silver. (But, note well, such coinage to bear no nominal value.)

In 1841, copper was sufficiently valuable to be minted into coins that would have a nominal value close to, if not identical with, the intrinsic value of the copper of which they were made. Today we could not use copper to coin money of intrinsic value, because due to the great industrialization of mining, copper is only worth about 67 cents a pound. A coin of one peso (about 10 U.S. cents) would have to weigh 67 grams – far too heavy.

Silver, in spite of the demonetization of the late 19th Century and the high tonnage mined yearly, is still sufficiently valuable to be used as the material for money with intrinsic worth.

How and when are we going to get rid of money of imaginary value? We don’t know. All we know is that as long as we are under its curse, we will live without tranquillity and rest. 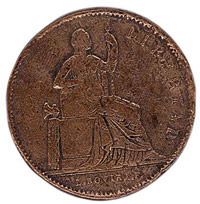 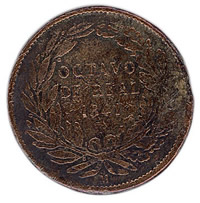