Why are the Americans smiling?
Hugo Salinas Price

The Americans are delighted with their economy; they congratulate themselves on their prosperity, and offer their economic success to the world as an example. For them, the rest of the world (except for Europe perhaps, Great Britain and other anglo-saxon countries) simply does not know how to manage things.

The graph (at the end of article), explains why they are so satisfied with their economy.

For twenty years, up to 1968, the increase in the amount of dollars in the hands of Central Banks of the world was quite restrained, although constant. The United States were careful to restrain their monetary and credit expansion, because the dollars held by foreign Central Banks were redeemable in gold. During those years, however, the U.S. were steadily losing gold reserves to those Banks, as they satisfied the demands for redemption of their dollar I.O.U.’s. (dollar bills).

In the years leading up to 1968, General de Gaulle in France had been firm about the Bank of France’s policy of dollar redemption for gold. In the Spring of 1968, the good General found himself facing a near revolution, and was almost overthrown. World leaders noted the curious coincidence of events.

The flight of gold from the U.S. persisted, notwithstanding arrangements between the more developed countries, not to demand gold for dollar redemption among themselves.

Finally, on August 15th, 1971, President Nixon threw in the towel, and simply ceased redeeming dollars with gold, at any price. In 1944, the Bretton Woods monetary arrangement had stipulated that dollars would serve as Central Bank reserves as good as gold, because all dollars would be redeemed for gold on demand at the rate of $35 dollars per ounce. Nixon killed the Bretton Woods agreement.

There was no new international agreement. The Central Banks of the world simply went on receiving dollars for their reserves, without any possibility of redeeming them for gold. World Central Bank reserves, as far as dollars were concerned, became simply papers.

As the graph shows, once the U.S. were freed of the commitment to redeem dollars, they embarked on an unrestricted credit expansion. Dollars in the hands of foreign Central Banks were like checks that are never cashed. A lovely arrangement, for the United States.

From 1971 to 1997, the U.S. provided reserves to foreign Central Banks, in an amount in excess of $1.1 trillion dollars (that is, one million and one hundred thousand millions of dollars) of green paper dollars, created out of nothing by their monetary and financial system. (The amount is approximate, but the approximation is sufficient to show the colossal increase).

The effect on the United States has been to provide them with a bonanza, a bonanza available to anyone who might have a limitless credit card, whose balance it is unnecessary to pay, and which is forever going up.

This is the postwar bonanza for the U.S., which Americans tend to think is due to their superior productive and organizational ability. Actually, it is the collection of tribute from the world, on a scale which makes the Roman Empire pale by comparison. The Americans have had an imperial "bread and circuses" at the expense of the rest of the world. No wonder they are smiling!

Their apparent success allows them to preach to the rest of the world on the need for banking transparency, on the need for more open banking systems, on the need for the elimination of corruption and cronyism from the financial systems of the rest of the world. They proclaim the need for adapting to globalization, which favors the U.S. because it allows the Americans to buy up the world with their paper dollars. For the same reason they proclaim the need for privatizations, which are indeed desirable, if privatization did not imply that Americans can buy, not with goods, but with papers, anything they desire, especially strategic resources such as, for example in the case of Mexico and Brazil, "Pemex" and "Petrobras".

Unlimited imports of merchandise – the credit card has no limit – allow the U.S. to continue the credit expansion, for cheap imports keep prices under control. The U.S. has transferred its inflation, to the rest of the world, exporting it in the form of dollar reserves in Central Banks around the world.

When dollars arrive in foreign countries, the local Central Bank purchases the dollars in exchange for the local currency. More reserves equals more local currency. More currency means prices rise; as prices rise, cheap exports to the U.S. decline. The remedy: devaluation. Other countries must devalue their currencies in order to have the privilege of receiving papers from the U.S. Devaluation destroys local financial and productive systems, because in order to persuade local savers from exchanging their local currencies for dollars, interest rates, for instance in Mexican pesos, are raised. Mexico and Brazil are classic cases.

It is a curious fact that not one Nobel prize winner has pointed out these extraordinary circumstances. The reason must be, that dollar reserves are such a gigantic tribute operation, that it is not convenient to point out these things.

Privatization, opening to U.S. investment, globalization, transparency, and the struggle against corruption, are words which hide the purpose: to concentrate unlimited power, by using irredeemable dollars to buy up the world.

The graph shows that gold in world Central Banks has for all practical purposes not increased in 50 years: there is only 12.3% more gold in their vaults, in ounces, than there was in 1948.

From the U.S., we cannot expect any advice whatsoever, that goes against U.S. interests. It is we – Mexico specifically - who must determine what our interests are; protecting them is our affair. The U.S. will never tell us that our situation, worse day by day, is the consequence of the monetary system which the U.S. controls. Brazil, the most recent victim. Ecuador, another. Argentina is stumbling. Hong Kong and China will devalue sooner or later. Chavez in Venezuela will fail to turn his country around. We are all in the same dollar reserve boat. For Mexico, dollarization, currently being suggested by some American politicians and seconded by myopic Mexican businessmen, is surrender to the U.S.

Mexico must think fast. We must reform our monetary and financial system, and base it upon a currency with a real value, which will not depend on the dollar reserve system which guarantees instability. Only a silver currency can meet that vital requirement 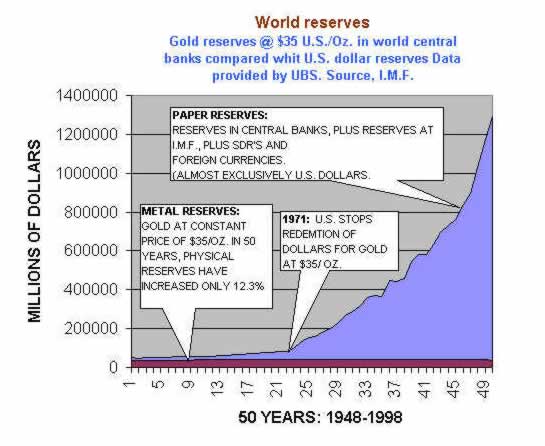