When a baby is having a tantrum because he’s tired or sleepy, the best thing to get baby to forget what bothers him is by distracting him with anything you may have at hand: a pair of glasses, a rattle, or a bunch of keys.

The Mexican people are tired and angry, and they are having a great tantrum. It is impossible to correct or eliminate in short order the causes of their anger. What we need is to distract the angry population with some good news that will catch the popular attention and imagination.

For nine years I attempted to convince the Federal Congress of Mexico to approve legislation that would monetize the “Libertad” silver ounce, which is minted by the Mexican Mint; the coin would then have value for a given number of Mexican pesos, by means of a quote on the part of our Central Bank. The quote would be a floating quote, somewhat higher than the value of the silver ounce on the international markets, and would increase with increases in the value of silver on the markets, but never fall (in Mexican pesos value) if the price of silver should fall.

My efforts did not meet with success, but the project gathered quite a bit of support in the Congress, both on the part of Federal Congressmen as well as on the part of Federal Senators. An insignificant dispute between the PRI and the Leftist PRD caused the PRD to withdraw its support, which the PRI required to pass the legislation.

Mexico needs some good news! Mexico is a marvelous country! We have many, many problems, but our Homeland is wonderful and generous.

The government of Mexico has stepped on the toes of every possible sector of the country with the avalanche of fiscal reforms recently enacted, all of which strengthen the State.

Now that the population is well and fully pissed-off, it’s the Federal Government’s turn to do something for the benefit of the general population.

Think about it, Mr. President, Gentlemen Senators and Congressmen: it is necessary to pacify the outrage felt by the people.

Give Mexicans a silver coin which has been turned into money!

Grant Mexico - grant Mexicans - that great gift, which will not cost the government one cent, but which will actually bring in more taxes to the Federal till; because the price of silver will rise with the news that Mexico monetizes a silver coin; the sales of the mining industry will rise; the income of the mining industry will rise and so will the taxes paid by that industry.

Our Government would do very well to give us this good news, which will instantly echo with praise and admiration from all corners of the world:

“MEXICO HAS A SILVER COIN THAT IS MONEY!” 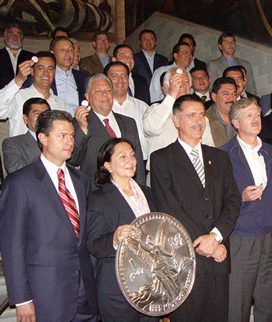 Unanimous support for the Monetized Silver Coin for Mexico Project, on the part of all State Governors gathered at the National Governors’ Conference (CONAGO) in March 2006. In the picture, in the first line, the Governor of Mexico State at that time and today President of Mexico, Enrique Peña Nieto, for the PRI party; Amalia Guzman, Governor of Zacatecas State, for the PRD party; Carlos Abascal, Secretary of State of the federal government of President of Mexico Vicente Fox, and Juan Carlos Romero Hicks, Governor of Guanajuato State for the PAN party.