The Crumbling World Order and Who Will Pick Up the Crumbs?
Hugo Salinas Price 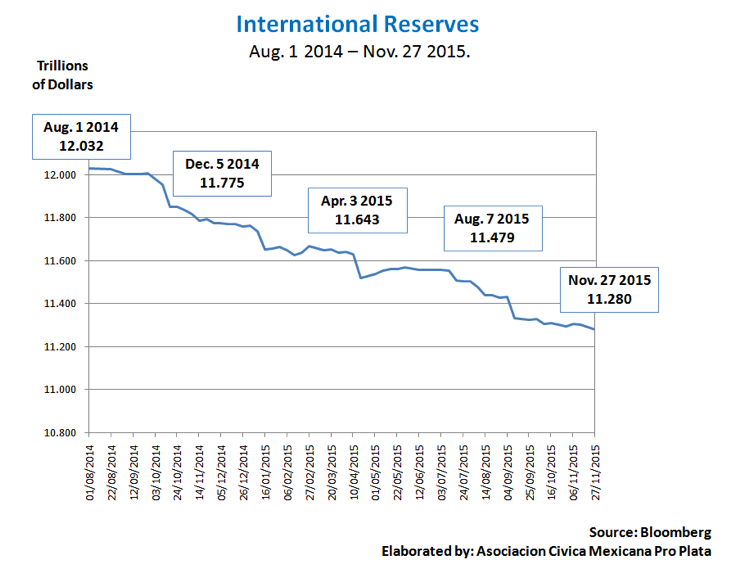 Central Banks increase their Reserves by purchasing Government Bonds - denominated in Dollars, Euros, Pounds or Yen - when those currencies come into their hands as a result of a surplus of exports over imports; all countries strive to have such surpluses, because if they are not able to export more than they import, then they are condemned to devalue their currencies in order to make their exports more attractive; they are also burdened with higher interest rates on their borrowings, as a result of the threat of further devaluation. Higher interest rates in turn, exacerbate the outflow of Reserve currencies and make devaluation all the more necessary.

The fact is that countries holding Reserves have not been paid for the totality of their export surpluses. To hold Reserves is to grant credit. The proof is that Reserves held by the exporting countries are Bonds, that is to say, certificates of debt. The last figure for International Reserves, as of November 27, is $11,280,000,000,000 Dollars - $11.28 Trillion Dollars. The figure nicely documents the total value of what the exporters of the world have sold to the countries which issue Reserve Currencies, and for which they have not been paid, since August 15, 1971.

At the present time, the system at work since the end of World War II is operating in reverse. Reserves are falling, the majority of which are held in Dollars. Government Bonds held as Reserves are being sold off. An important contraction in world commerce is taking place.

When 6.52% of the total Reserves has been sold into the market, one would expect the value of the related Bonds to fall, and their interest rates to rise, other things being equal. If their interest rates have not risen, it must be due to the generosity of the buyers of the Bonds. Perhaps the entities that show such generosity in their purchases are the same entities who sold the Bonds in the first place, the Federal Reserve among others?

China's Yuan has recently been accepted by the IMF, to form a part of its "basket of currencies" and as of Oct. 1, 2016 the Yuan will be anointed as a Reserve Currency by the IMF. When that happens, China will have its own Reserve Currency, and less need to maintain its present enormous pile of Reserves in Dollar and Euro Government Bonds. So the sell-off of International Reserves might become even stronger. The Fed and the ECB have enjoyed selling Bonds at ever higher prices and ever lower interest rates, so low that in Europe these Bonds have a negative yield. They will have to develop an appetite for Bonds, because China is going to send a bunch of them back to the sellers when the Yuan achieves Reserve Currency status. As China liquidates a portion of its Reserves, guess what China is going to buy with the Dollars and Euros it receives for its Dollar and Euro Bonds?

The majority of Reserves are held in Dollars, as we have said, and when the Dollar Bonds are sold, they are sold for Dollars to satisfy the Capital flight, and buying the Dollar makes its relative value rise. From a low point, some years ago, of about 71 against a basket of currencies, the Dollar has appreciated to 100 at the present time, increasing the strain upon debtors (in the exporting countries) who owe Dollars by some 41%. The strain upon the debtors increases the urgency in getting out of Dollar debt and stimulates the related Capital flight.

What we are witnessing these days is a mighty contraction in economic activity around the world, that reinforces itself. International Reserves are being sold off in a desperate search for liquidity. The contraction was originally seeded by a slow-down in the economies of the Reserve-issuing countries, i.e., USA, Britain, Europe and Japan.

The Chinese evidently have some plans which they are not divulging, for we see that China is purchasing huge amounts of gold. In the meantime, the US insists on trashing the price of gold, as if to say that the Dollar is and will remain the world's supreme currency till the end of time.

China is quietly accumulating gold and saying nothing. But we can try to guess what China is thinking: "The US is mired in an insoluble problem. Do nothing to provoke the US. The US will destroy itself in a huge collapse."

A world struggling with increasingly severe economic problems is not a world that is going to be in the mood or in condition to continue to respect international treaties regulating commerce, much less such regulatory dreams as co-ordinate action on "Climate Change".

What lies ahead is a situation where each country will attempt desperate measures to ensure a minimum of internal stability. Treaties will be ignored or thrown overboard. Devaluations around the world will proliferate; some countries will declare bankruptcy. The gravity of the crisis will make these events inevitable. We have just seen India refuse to abide by the rules of the World Trade Organization (WTO); the WTO rules say that governments are not to grant subsidies to sectors of their economies. But India is forced to subsidize its agriculture, because it has a population of over 1 billion and 67% of the people depend on cheap food for survival. So the statist international rules - emanating mainly from the US - to regulate the whole world will be trashed, eventually.

When push comes to shove, China, with 1.3 billion or more population, will take unorthodox measures. The pressure of the enormous population of China, made up of quite intelligent men and women, is going to force its government to stop adhering to international covenants. China will take whatever measures can offer hope to the Chinese.

China will then say to the world: "We sell cheap. Very cheap. But, we sell for gold, for very little gold; and we pay with gold for what we buy - for very little gold, but we pay gold. You want our stuff, you find a way to pay us in gold. Or else, what do you have to offer us, in exchange for our stuff? You have something we want - we pay in gold. Rest of the world, do as you please."

The nations of the world are not going to flounder endlessly in the crisis that is upon us. Out of the huge crisis, China will break away and state its terms. And the terms will be: GOLD. The rest of the world will follow.