How Much Gold Is There in India?
Hugo Salinas Price

Those interested in gold are always on the lookout for news regarding the amounts of gold held by Central Banks around the world.

Abundant gold held by Central Banks is generally supposed to further the cause of a return to the gold standard, but strong Central Banks only represent a stronger hold of bankers upon the populations which they have been exploiting; the driving interest of the top bankers in the world is to retain their unwarranted privileges: the public interest is not a priority by any means.

Central Banking was conceived as a way to allow bankers to increase their profits by lending long (at more profitable interest rates) and borrowing short (at low rates paid to savers on their savings). Greed was the motive for creating Central Banks, as these institutions were there to save bankers from the results of their greed - the guaranteed illiquidity of banks when they engage in borrowing short and lending long, known as "Duration mismatch". Banks that are properly run do not require, and never have required, of a Central Bank, because they do not indulge in duration mismatch.

The top bankers of the world have had enough influence to pervert the supposedly immutable Rules of Accounting, as set out by the most prestigious academics. I discovered this early in my career, when I found out that though our Auditors - then prestigious "Arthur Andersen" - did not allow my private business to count as income the interest on credit to customers, to be paid in the short-term to my company, the Banks on the other hand were (and are) allowed to post the interest to be earned on their long-term loans as income. In Accounting, some entities are more equal than others.

Large amounts of gold held by Central Banks are definitely not in the public interest. What is of the greatest importance, is gold in the hands of the people, which would make a return to the gold standard viable.

India is a great example of a country where large amounts of gold are in the hands of the population - 1.3 billion human beings, at least.

We hear about gold held by India's Central Bank, but rarely hear about at the fact that Indians have been saving gold for thousands of years; the Indians regard gold with religious awe, as it actually forms part of Hinduism.

I have drawn up a table with an estimate of how much gold is in the hands of Indians. This is just a personal estimate, relying on the centuries of accumulation of gold by Indians: 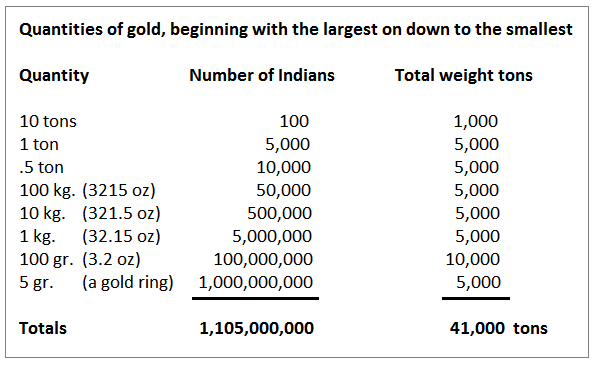 I think these numbers are quite conservative. I may be grossly underestimating the accumulations of more modest size: for instance, there may very well be several million Indians who own 320 oz of gold, and there may also very well be many millions - perhaps 100 million - who own 32 oz. There are many fabulously wealthy Indians in India, and their families have been accumulating gold for hundreds of years. There is enormous gold wealth in India, although there are, perhaps, 1 billion who are poor. I am still leaving out of the calculation, 200 million Indians.

So the above table is just a guess.

If any country is ready for the gold standard, it is India. India is reputed to be a country with a highly corrupt bureaucracy; furthermore, flaunting regulations is built-in to the Indian psyche - a condition which protects personal freedom. Indians are not supposed to travel on the roofs of railroad cars, and yet they do it all the time!

Civil disobedience can be a sign of a healthy nation - it depends on what is being disobeyed. Avoiding income taxes is totally justified. The Premier Modi of India is trying to corral the Indians into paying income taxes - only a small percentage of Indians cannot avoid the tax - by declaring most of the paper money in the hands of Indians as illegal. So the Indians are desperately trying to get their wealth transferred into gold. The poor little brain of Modi is - unfortunately for India - attempting the change the way of thinking and of living of over one billion Indians, a way of life that Indians have followed for thousands of years. "Fools rush in, where angels fear to tread".
Times are changing. Great economic turmoil is set to affect our world, due to fundamental problems arising from declining available energy to sustain the world's needs. As an example, ExxonMobil appears to be headed for bankruptcy. (See https://srsroccoreport.com/end-of-the-u-s-major-oil-industry-era-big-trouble-at-exxonmobil) This will be a severe shock for Americans, when it comes.

Those who are wiser are acquiring gold at bargain prices, at good prices and at high prices. The price means nothing. But it does require some wisdom to understand this.